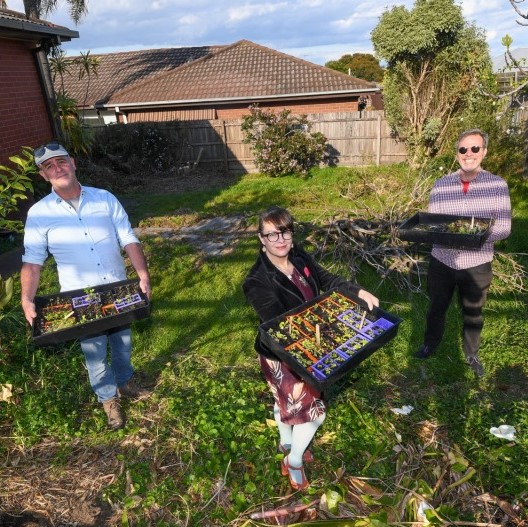 This article about about the Oakhill Food Justice Farm has now been published in the Good Food section of The Age.

Behind an old church in the heart of Preston in Melbourne’s north, a remarkable transformation is taking place.

For years the vicarage at the back of St Mary’s Anglican church lay empty, the house growing mould inside, the garden overgrown with weeds and overrun with vermin. Now a team of urban agriculture farmers are turning the site into a fertile food garden, growing vegetables for disadvantaged people in surrounding suburbs and the volunteers who will work there.

Called Oakhill Food Justice Farm, it is another project from Sustain, a Melbourne-based not-for-profit organisation specialising in designing and building sustainable and healthy food systems. It is headed by executive director Nick Rose and founding chair Kelly Donati, lecturer of food studies at William Angliss Institute.

“Around the world there are 800 million people growing food in cities, some involved in projects like this,” says Rose. “Twenty per cent of food around the globe is grown in urban agriculture. It is something we were once very adept at, but a skill Australians are rapidly losing.”

Brennan and his team are building raised garden beds from wood and tin salvaged from the church yard. Swiss chard, cabbage, celery, mustard greens and rocket seedlings are ready to plant.

“We could have leafy greens ready to feed people in a matter of weeks,” says Dr Brennan. “This will be an educational site where people can learn food growing skills and composting. The farm will also be mirrored [on a website] where people can learn about what we are doing here and observe the transformation remotely.”

He is interrupted by a woman who wants to help with composting and gardening. “Give me your number, and I’ll call,” says Dr Brennan. “I don’t have a phone,” replies the woman, but she agrees to return in a week.

“Urban agriculture is about food justice and food equity,” explains Dr Donati. “When the City of Detroit, for example, was declared bankrupt, disadvantaged people in the community started to reclaim land to farm for food. First they squatted on it, then they worked together to organise capital or apply for grants to buy or rent land.”

Dr Donati grows her own food on an urban farm in Melbourne’s inner west on a block of land owned by a developer. The developer has handed the property to the community in return for concessions on land tax.

“The benefits are astounding,” she says. “I have seen the enrichment of the environment, and the return of insect diversity and lizards. With our compost, we have saved over a tonne of food waste from ending up in landfill. Plus, we get to eat really fresh, highly nutrient-dense food that is delicious.”

Dr Donati says urban agriculture is not just about food – “it’s much bigger than that”. A recent survey of 9000 Australians conducted by Sustain revealed that gardening, particularly backyard vegetable gardening, benefits people in many ways.

“In the wake of the horror of the [2019-20 Black Summer] fires, gardening gave people a sense that they could repair, even on a very small scale, some part of the earth,” says Dr Donati.

The survey also describes how Australians gain much pleasure from eating vegetables they grew or giving them to neighbours, saving and sharing seed, and learning food gardening tips from older generations.

After reviewing the survey results, the Sustain team is now calling upon federal, state and territory governments to co-finance to invest in promoting food gardening across the nation.

“Mental health costs Australia over $500 million a day,” says Nick Rose. “We are asking for the governments to take urban agriculture seriously and provide $500 million for a National Edible Gardening Fund that will develop many more gardens and learning centres like this across the nation.”

Read the article on The Age here: https://www.goodfood.com.au/eat-out/news/the-green-shoots-of-city-gardening-the-old-melbourne-church-yard-becoming-a-fertile-farm-20210923-h1ysam