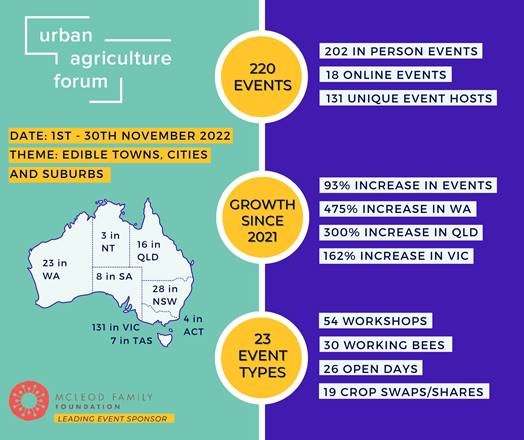 Sustain is thrilled to report a hugely successful conclusion to Urban Agriculture Month 2022. We saw 220 events across the country, nearly double the total from 2021, and an estimated 800% increase in participation: 24,000 people participating compared to 3,000 in 2021.

More than half the events (131) were in Victoria, an increase of 162% from last year. Twelve events were held in Darebin, including a fantastic long table lunch at the Oakhill Food Justice Farm in Preston, as part of Community Garden Australia’s urban farm tour following their AGM.

Urban Agriculture Month is an annual celebration of everyone growing some of their own food, whether in public, private or community spaces. It’s also aimed to build visibility and recognition for this growing movement. We launched UAM 2022 with the release of Growing Edible Towns and Cities, survey of the urban agriculture sector in Victoria, commissioned by Agriculture Victoria. In that report, there’s a detailed roadmap to rapidly expand this sector, with calls for serious investment and planning changes from the State government. You can support this work by endorsing the Consensus Statement for food system reform in Victoria, and contacting your local MP about it, via our campaign website here.